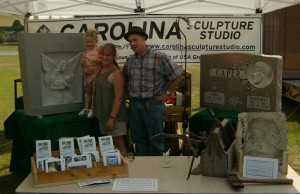 Sculptor, carver, finisher, artist, artisan. Along with these classifications, the term “Master” is used and misused – especially for self promotion . So what exactly is a “Master Sculptor“?

Other disciplines incorporate successful completion of standardized certification testing or even of a “master piece” during the transition from apprentice to journeyman to expert.  An academic title is only that, an adjective specifically describing mastery of curriculum that must be purchased before it is legally viable in the marketplace.  That isn’t our tradition, so do not be misled.

In our granite world, “Master” is never used to describe oneself as a sculptor, carver, finisher or even stonecutter.  When most accurate, it is a compliment paid to a peer showing respect of demonstrated great achievement and ability.  It is as elusive or as obvious as when a boy becomes a man.  When someone has to tell you how good they are instead of letting their work speak for them, trust what the work says instead of the person.

Sculpture terms bantered about can lead to confusion.  A Sculptor is the artist who creates the concept, whether or not they produce the final version in whole or part.  For client approval, a Full Size Artist translates the concept into a 1:1 scale two dimensional graphic drawing(s) and/or a Modeler translates the concept into three dimensions, usually using a plastic medium like terracotta clay or plastilina before casting the approved maquette into the final plaster working model.  A Carver produces a design, whether created by another artist or the carver, in stone using direct or indirect methods.  Faster direct methods embraced over the past century allow the carver to directly produce the design by sight and imagination into the stone, much like a lay person imagines the sculpture process. More traditionally accurate but time-consuming indirect methods such as pointing require the carver to precisely reproduce the design by taking accurate measurements of the approved model and transferring these measurements into stone.  When all of these disciplines have been clearly mastered, a granite craftsman achieves recognition among his peers as a Master Sculptor.  There is no fanfare, only profound humility when a weathered veteran casually endows such an opinion upon a former novice. 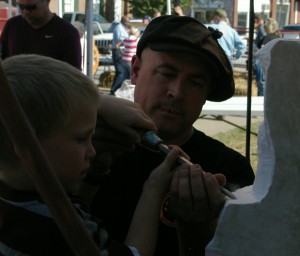 These terms also deserve a brief overview.  Traditionally, Artisan is a term respectfully describing one producing technically accurate work without participating in the composition’s development which is done by an  Artist.   Sadly, these terms can become divisive when used selfishly.  Many Artisans, such as Mount Rushmore’s Chief Carver Luigi Del Bianco, are greatly accomplished Artists wholly deserving of Master recognition, as they must be able to bring life to work conceived by one who cannot produce it.  It is rare that an Artist will reveal, much less embrace, their inability by equating or subordinating themselves to whom they employ.  So words are used to diminish the achievement of the one who possesses greater ability. 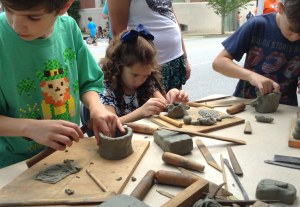 By the time one reaches the level of Master in our world of stone,  the aforementioned humility is partially a product of such treatment.  Anonymously creating good works in the hardest stone from novel ideas otherwise only achievable  in pencil on paper or clay or plaster is transforming. To think that such an Artisan is not an Artist reveals much about the source.

Granite suffers no fool without penalty.  The stone tells the truth with no agenda so our work speaks for us.  During my apprenticeship, my clearly confident and capable Master Sculptors rebuked me when I called them a “Master”.  They taught by example how true masters become more focused as years pass, better understanding the stone’s power to humble as it wields total control.   This critical lesson will be taught until it is learned.

John 3:27 states, “To this John replied “A man can only receive what is given him from Heaven”. John 3:30 continues “He must become greater; I must become less.” Passing years make it easier to understand this scripture, my given talents and the lessons of stone.  Over a decade after being set free by my Master Sculptor, one day he mentioned “the gift” I have as a sculptor and my responsibility to take great care of it.  Even if I am called a Master Sculptor by peers and competitors, it will not be up to me to claim the title for myself.

At a recent Granite City Festival clay workshop, a mother came to me saying, “My son has talked about nothing but doing this with you for months.  Every year, all he wants to do is come and do clay with “Mr. Button the granite sculptor.”  You know, you’re going to make real artists out of some of these kids.”  To help sculpt the future of another artist, perpetuating my Masters’ investment in me, would be more important than every stone I ever do.  Since then, a Christmas card from one of my Masters, now well into his 90’s, said “Clint, I always knew you would make it as a sculptor.”  Once again, the lessons of the Master are being taught to the apprentice. His unerring confidence and generosity towards me, and the similar expectation of mine towards those who follow, allows all of us to perpetuate this pursuit together.

Those of us who cut stone for a living know exactly what Frank meant about the differences between a pencil and a chisel.   Much like self-praise, pencil marks on stone prove nothing compared to the irreversible cut of a chisel.  Old Masters like him and Elberton’s famous Master Sculptor Richard Cecchini, now deceased, have long since demonstrated their merit.  As my portfolio develops, I strive to expand my worthy contribution to the public gallery of sculpture.  I hope to inspire others like my Masters inspired me.

All the while, the granite stoically resists.