You know, Clint, my family’s done this work for a long time.  We open a lot of stones, set them all over the USA.  There’s not many like this one, that really blow me away when we just uncrate them- you know, before we even install it.  You nailed it.  Nobody does work like this anymore.  Hard to believe we just unhooked it from the crane.  It’s only been set for a few minutes, but that already looks like it’s been in the cemetery for 100 years or more.”    Matteo Calcagni, Granite Corporation of Barre Barre, VT.

Throughout the history of stone work, man has been humbled by the natural shapes and surfaces possessed by stones.  Through fallible attempts to reproduce these surfaces and enhance his work, he has been limited to carving the stone to appear natural.  This is largely because stones soft enough to be worked were generally sedimentary– deposited in layers like limestone- or metamorphic– sedimentary rock that has been impacted by heat and pressure to essentially knead it like bread dough to produce stones such as marble- and only break in less advantageous ways. 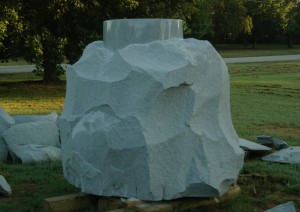 A completed 7-ton Shell Rock Pitch base, with false tool marks produced and left upon request. 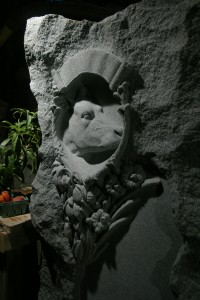 The epitome of granite craftsmanship,  True Shell Rock Pitch incorporates deep scalloped breaks- sometimes ending at the edge of carvings or panels- but always done with no visible or remaining tool marks. This project in Barre Gray Vermont Granite is installed at Highland Cemetery in Chelsea, VT.

These attempts never look completely natural, because the stone is forever injured when it is touched by a tool.  Crystals are crushed when struck by a hammer, chisel or point.  This leaves a white stun or bruise.  Abrasive methods dull exposed crystals, causing light to be dispersed instead of specifically reflected.

Granite, an igneous rock formed as molten magma cools below ground, possesses unique qualities allowing to be broken to mimic natural surfaces.  While still a molten liquid mass, the earth’s magnetic fields influenced the orientation of developing crystalline structures as the mass cooled.  It becomes very strong  in one plane- the head grain– making it nearly impossible to break in that direction.  The other two planes- the run and the rift–  break more easily and in a somewhat predictable manner.   For simple comparison, envision a piece of  wood that is easy to split in two directions along the grain but very strong and hard to break in a third direction across the grain.   Once work in granite became common in the late 1880’s in America, these unique grain characteristics were embraced and a new technique called Shell Rock Pitch was born.

Arguably, the most famous and admired Shell Rock Pitch memorial job is the Corti Stone at Hope Cemetery in Barre, Vermont.  Cut from a single block of granite, a life-sized portrait statue of Master Sculptor Elia Corti sits pondering at a broken column with tools of the trade composed against a background of shell rock.  Typical of our granite tradition, this memorial was done by family and sympathetic expert acquaintances to produce an enduring memorial more extravagant than is often purchased.  Through barter, negotiation and opportunity, Masters wield hard-earned expertise with skilled virtuosity and exuberance to celebrate someone close to them. Usually such work is only fully understood and appreciated by their stone peers.  Few other customers comparably empower us to simply do what we do best to create true works of art on a canvas of stone.  The ones that do are richly rewarded.   Except when one is requested, the lack of a signature on stone is indicative of our priority to the greater good; to humility instead of self.  A lifetime of hard toil is transformed into an example of respect, skill and generosity for future generations. 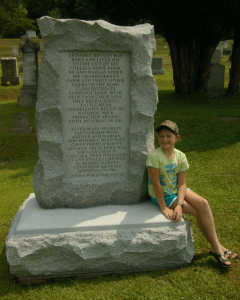 Incorporating panels for text into Shell Rock Pitch projects is another application of the premium heritage craft. Lettering can be produced directly into the granite via sandblasting, hand-carving or combination of methods. A bronze plaque for text is another popular option.

Most experts, even within the granite industry, say it cannot be done anymore.  Many claim real Shell Rock Pitch is a truly “lost art.” and that all the Masters that knew how to do it are long gone, retired or dead.  Then they’ll try to sell you what they call Scalloped and Shell Rock because that is all they have to offer.  Do not be misled.  Shell Rock Pitch is alive, well and still being produced here in the 21st Century here at Carolina Sculpture Studio.

Working among his Masters, my cousin Master Carver & Finisher Andy Hebert learned the secrets of the unique granite finisher’s cutting technique called Shell Rock Pitch.  Apparently unrealized at the time but now clearly obvious to many, he is the single person that saved this craft from being lost for all time.   Years later, he carefully taught me, as his apprentice and legacy, how stone is carefully broken off or “pitched” (also called “shelled“, “scalloped” or  “shimmed“) to produce deep round scallop-shaped shells or scoops on the stone face.  Shell Rock Pitch, sometimes alternatively called a Shell Rock Finish, scalloped rock or Shell-Rock monument, leaves a completely virgin broken surface that reflects light brilliantly with no remaining tool marks or stuns.   No matter how many times you do it, it is simply awe-inspiring to do shell rock and reveal what God put inside the stone. 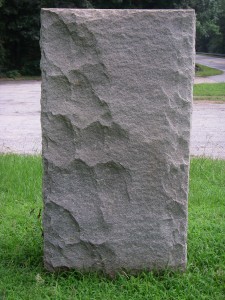 Regular rock pitch, commonly produced around the border of granite stones, is popular because it is simple, very economical and quickly produced.  It may even be done in a curving or scalloped pattern to mimic Shell Rock Pitch.  But rock pitch is not the same as Shell Rock Pitch, no matter what a salesman says.

It is simple to break a scallop from the edge of a stone, reaching approximately one foot from the edge onto the stone’s face.  This is why stones, as shown on left, can easily be found with scallops reaching from one or both sides of a surface, only to have a taller and often flat quarry-split surface across the center of the stone face between normal, less scalloped rock-pitched breaks produced from the edges.  When this happens, the stone has revealed the limit of that craftsman’s ability.  Rustication, a process where tooled work is bordered narrowly by regular rock pitch suggesting that the tooled area has been revealed from within or underneath the natural broken surface, is also not Shell Rock Pitch unless the namesake shell shaped scallops cover the wide broken surface.

True Shell Rock Pitch produces pronounced deep scallops across interior surfaces-  far away from the edge of  a stone- where a flat surface would normally be found without leaving any stuns or tool marks.   If there are not 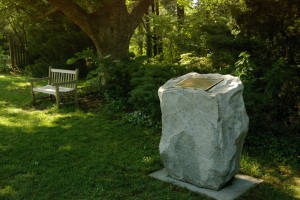 One of the most intrinsic but often overlooked aspects of Shell Rock Pitch is the platform which it provides for organic assimilation into the surrounding natural environment.  Because it is broken stone as found in nature, organic matter and moisture are easily retained upon the surface.  When fertilized by the actions of birds and decomposition of this organic matter, living plants, moss, lichens can readily develop.  The stone becomes host, supporting life into the future as it simultaneously  honors the past.   This completely natural patina cannot be falsely produced.  It integrates the work of man into nature, continuously transforming each into more together than they were separately.   Old Shell Rock Pitch stones regally cloaked with decades of ever-increasing lichen growth have a grand presence that is both tangible and intangible.

Marble and many types of stones sold as “granite” lack the same grain characteristics as true granite. Experience teaches that these are not as well-suited for the Shell Rock Pitch process as high quality American Barre Gray or Georgia Blue granites.  And to date, real Shell Rock Pitch similarly remains an exclusively American product and technique.

For these and more projects, large and small, visit the Shell Rock Pitch Gallery

There’s not many people anymore that even know what real Shell Rock Pitch is, much less appreciate it like you and me.  A job that’s hand-axed or with honest Shell Rock Pitch looks as good today as it did a hundred years ago or will look a hundred years from now.  I would rather see something like that any day.”    Jeff Rousey, owner- M&R Granite Company Spartanburg, SC.

Visit the Featured Work page to view additional images of some of my Shell Rock Pitch projects.